Sunway Pyramid (Chinese: 双威金字塔) is a 20th century shopping mall located in Bandar Sunway, Subang Jaya, Selangor. Developed by Sunway Group, this complex was opened in July 1997, before the next century year, 2000. After 19 years since it first opened its doors in 1997, Sunway Pyramid, Malaysia’s first themed shopping and entertainment mall has undergone a transformation to herald a new shopping kingdom with 4 million square feet of retail space. The main section and front lobby of the mall's design is an Egyptian-inspired Pyramid with a lion standing guard at the entrance. The lion is the logo and mascot of the building. The building's gross floor area totals 4,276,945 square feet (396,000 m²) as of 2014.

Architecturally, the Egyptian-inspired Pyramid with an eye-catching lion standing guard at the entrance is now joined by two domes – the Orange Atrium and Blue Atrium in the expansion. Inspired by the Sun God ‘Ra’, the Orange Atrium is an architectural marvel with its sun flare pattern and bright, warm and radiant hues while the Blue Atrium is themed according to the Great River Nile with design of shade of blue, panels symbolising the water waves of river Nile. 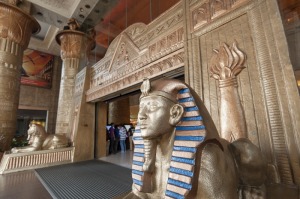 Nobody has reviewed Sunway Pyramid yet, Be the first.