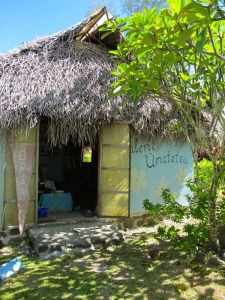 Melanie lives and works in her local style house on the motu of Maeva, on the island of Huahine, in French Polynesia. Just south of the Equator, in the middle of the Pacific Ocean, Huahine is a voluptuous island covered with luxuriant vegetation and colourful flowers, encircled by an infinity of blues, violets and aquas. After an initial sojourn in Moorea and Tahiti in 1979, Melanie returned to paint in 1999, and continues to bathe in an unending fount of inspiration in this exquisite little corner of the planet.
Various techniques and mediums serve to keep her work fresh and evolving. Her studio space is filled with visual delights running the gamut from printmaking to oil painting, and everything in between--Chinese brush sepia paintings, graphic works in ink, pencil and charcoals, gouache and watercolours, soft and oil pastels, and even a few acrylics. Her oil paintings are custom framed with tropical woods, hand sculpted by Jean Huukena from the Marquesas island of Nuku Hiva, famous for their carvings.
For the budget minded Melanie has created Limited Edition prints of her paintings, on paper and canvas, which are individually hand retouched before being signed and numbered. Offset prints from her pen and ink drawings and posters are also available.
Inspired by the Polynesian lifestyle she is immersed in, her paintings reflect the unique world of the south seas—luscious still lifes of tropical fruits on local style calicos, portraits and genre paintings, landscapes and seascapes of sublime beauty.
Her artistic formation began in her earliest childhood, with her mother being an artist and art teacher. Travel and nature were also pursuits her family engaged in, so as a child she discovered not only much of the beauty of the United States but also the richness of Europe, and the exoticism of the Orient. Her family lived for 2 years in India, whose pageantry of sumptuous colours and variety ignited her dormant Gypsy blood. She pursued the artistic path quite naturally, ultimately focusing on oil painting as her primary medium. As a child she studied at the Columbus College of Art and Design, in her hometown, and spent a year abroad combining study at the Ecole des Beaux Arts of Aix en Provence with several private art studios, and graduating with a degree in Fine Arts from Denison University in 1976. Following graduation she traveled extensively, painting and exhibiting in France, Morocco, Samoa, Tahiti, New Caledonia, California, Boston, and Providence Rhode Island, where she lived for 20 years and was active on the board of the historic Providence Art Club. Her work has been included in the famed Salon Nationale des Beaux Arts de Paris, hanging in the Caroussel du Louvre, and is collected by personalities including the President of Hotel Drouot and Pierce Brosnan. Islands Magazine featured her in a "getaway" story in August 2011, and she has been the subject of several documentaries aired on the Travel Channel, in French and in English. Her regular exhibitions on the island of Tahiti are popular with local and international art collectors.
Mostly she just loves to be painting in her studio or outdoors on the island of Huahine somewhere, where motifs abound! She enjoys the visitors who stop by and is always happy to exchange stories and ideas. Ice cream and other refreshments can be purchased, and a relaxing pause in the shade of market umbrellas and plumeria trees awaits those who find her studio/gallery on their way to the beach and coral garden of the former Sofitel Hotel at the end of Motu Maeva.
Her artwork and prints are available in finer galleries on the islands of Bora Bora, Raiatea, and Tahiti, and also in Honolulu. She has a gallery page on Facebook and a website, and can arrange to ship artworks all over the world. 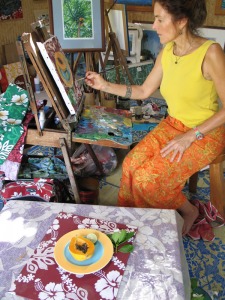 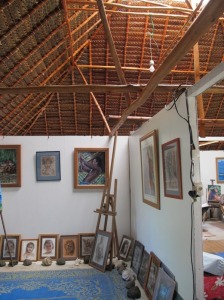 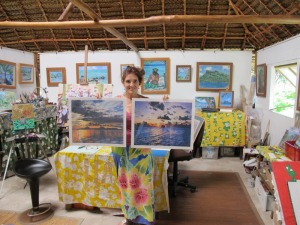 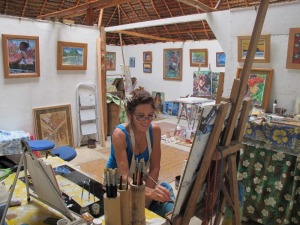 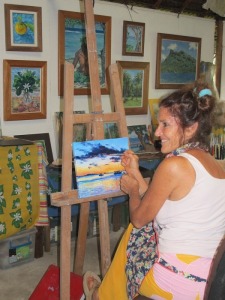 Nobody has reviewed Galerie 'Umatatea yet, Be the first.