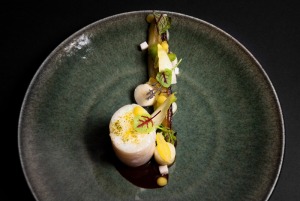 Kazuyuki Tanaka grew up close to his father who transmitted him his love of the culinary art and his child’s dream to have a French restaurant.

He started in Fukuoka and then Tokyo where he worked during 5 years for highly regarded gastronomic restaurants thus getting various experiences. In 2006, Chef Kazuyuki comes to France with his dream and also the desire to meet, exchange and pursue excellence. He will meet his wife Marine while working in Burgundy region,, sharing together their common passion for the Gastronomy.

They worked over the years for some of the best French Chefs; Mr Gilles Tournadre, Regis et Jacques Marcon, Mr Phillipe Milles et Mr Benoit Vidal. Chef Kazuyuki goes event beyond the borders to cut loose from tradition and learn from German and Belgium Chefs.Today the journey carries on with Racine. Inspired by the French culture and know-how, while drawing from his country affluences, The Chef meticulously develop at Racine a composed cuisine, rich of flavors.

Nobody has reviewed Restaurant Racine yet, Be the first.