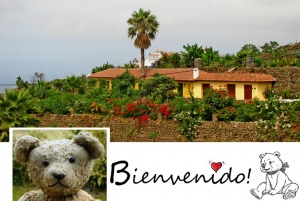 Everybody who wants to experience Tenerife just outside of mass tourism, is able to find a worthwhile goal - very close to the Centre of Icod de los Vinos. The small town with its old and historic towncentre is also known for the Millenary Dragon Tree, the Drago Milenario, which is located approximately three kilometres from ARTlandya.
In Santa Bárbara, a district of Icod de los Vinos, with quiet, rural ambience, you will find ARTlandya - la Finca. It is an estate with a tropical Park and old, stylishly renovated Canarian houses with different exhibitions. Besides, it is no TOY MUSEUM and no private collection of dolls of all kind. We show you the fascinating world of dollART! ARTlandya is also no dusty museum in the customary sense but dollART from today in rooms from yesterday.
Artistdolls and teddy bears on Tenerife? But why not? Tenerife exists not only of nature - the island also offers a lot of culture! ARTlandya is unique in whole Europe - it is a museum for contemporary dollART at the highest international level! A world of experience with DOLLS and TEDDYbears, a world for children and adults!

There are many small typical Canarian houses, inhabited by artist dolls and teddy bears. A project representing artists from all over Europe and far beyond. With various special exhibitions, we support also the art professionals in Europe and increase the visibility of their work. More than 600 artistDOLLs and TEDDYbears are exhibited on several showrooms in different houses. In the former old Fincahaus you see an exhibition with TEDDIES from the studios of many bearmakers and designers. After a short walk through a part of the garden you come to a stone house typical Canary in which the dolls are waiting for you. Artistdolls of more than 50 internationally known artists made of different materials like porcelain, pulp, vinyl, wax, cernit, ceramics, wood or felt. With a guidance by the museum you find out many details about the materials of the pieces of art and the stories of the best known DOLLartists.

You always wanted to know how does a porcelain doll is made? In a small workshop, integrated in the Museum, our visitors get the knowledge how to make a porcelain doll. We show you many working steps which are necessary to produce a doll of porcelain and which utensils are needed for it and you get answers to your personally questions.

Shopping at the Museum - of course! It is possible in a nice SHOP in ARTlandya. Here you find Artistdolls and Teddybears in limited editions für collectors but also some very special presents. In our shop we offer also objects of glasart, DOLLs and TEDDIES for children and other articles of handcraft.

You can recognize - it is not a Museum in the traditional sense but a Museum of contemporary dollART and a world of experience with DOLLs and TEDDY bears. A wonderful world for children and grown ups! You see, ARTlandya DOLLmuseum is more than a museum, it's contemporary dollart! We show you exclusively artistic contemporary dolls from the studios of the best known international artists. In future we want to support again with many special exhibitions artists in whole Europe to announce themselves and her works.The MUSEUM should be something that lives and remain alive! That's why everything is just a little differently in ARTlandya than somewhere else! Convince yourselves of it ...

We founded the DOLLmuseum of Villach in 1993, more than 20 years ago in Austria. After the turn of millennium we thought about to open a second museum on Tenerife. So we organised in January 2003 the first exhibition in an old manor house in the towncentre of Icod los Vinos - Mundo Muñecas in the Casa de Cáseres, in the Plaza de la Constitución. In April 2002 we bought this old Finca. We planned a lot, renovated even more,  dug vast amounts in plants, packed container in Austria and sent them on their way to Tenerife. But this is, actually, an another story. Caused by many delays we could open in March, 2012, finally, the DOLLmuseum ARTlandya on Tenerife.

Nobody has reviewed ARTlandya yet, Be the first.