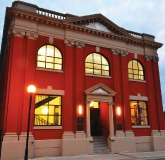 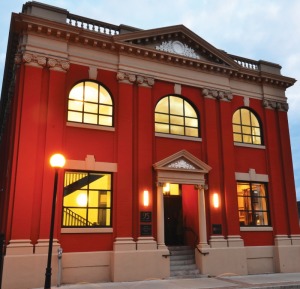 Raymonds is a collaboration between two Jeremys – head chef Jeremy Charles and restaurant manager and sommelier Jeremy Bonia. After two years of careful planning, and construction, Raymonds came to life in November of 2010 in tribute to two men who were influential in the lives of the two Jeremys: Charles’ grandfather, Raymond Baggs, and Bonia’s father, Raymond Bonia. The restaurant itself is housed in a stunning example of Newfoundland and Labrador classical architecture, built in 1915 overlooking St. John’s harbour.

Jeremy Charles - Head Chef
Born in St. John’s, Jeremy moved to Montreal at the age of 19 to pursue culinary arts at St. Pius X Culinary Institute, eventually landing a job at Mediterraneo under Claude Pelletier and Michel Ross. Jeremy's passion for fly tying and fishing for atlantic salmon led him to his dream job, working as a chef at a prestigious fishing camp in northern Quebec. He later found himself a regular at the Fulton fish market in Chicago where he worked as a personal chef and honed his skills at many of Chi-Town's top tables. Jeremy's connection to his roots brought him back to his hometown and at the helm of Atlantica in Portugal Cove. In 2010, he went on to open Raymonds with partner Jeremy Bonia. Jeremy travels regularly participating in culinary events like Cook it Raw, Terroir Symposium, Northern Chefs Alliance and Gold Medal Plates, where Raymonds was the national silver medalist.

Jeremy Bonia - Sommelier
Jeremy Bonia grew up in Logy Bay, and began his career in the restaurant business at Bianca's, one of Newfoundland's original fine dining restaurants. It was here that he developed an interest in wine which led him to become a certified sommelier. In 2007 he met Jeremy Charles and went to work with him at Atlantica, where, in their first year, they earned the title Best New Restaurant in Canada from En Route. Together they opened Raymonds in 2010, and took the Best New Restaurant title for an unprecedented second time. Jeremy has traveled extensively throughout France and Canada researching and buying wines for Raymonds. He has been featured in Decanter, Wine Spectator, the Globe & Mail and MacLean's among other national and international publications.

The exterior of Raymonds Restaurant. 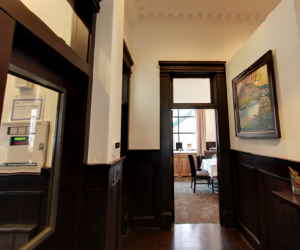 The foyer. The main dining room is located to the right from this angle, with the doorway to the private dining room in the centre of the photograph. 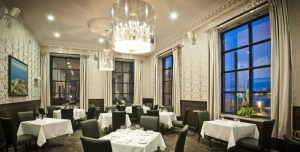 The main dining room. Both intimate and spacious, with large windows overlooking the St. John's harbour. 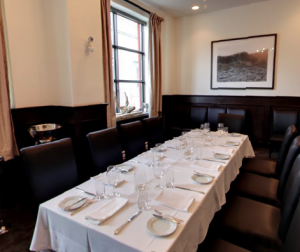 The private dining room. This room is available for rental and can comfortably seat up to 16 people. 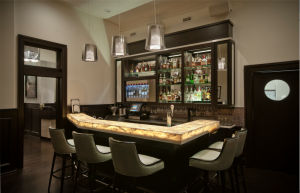 The lounge and bar. Guests are welcomed to sit at either the bar stools or tables (not shown in photo) in this room for either a full meal or just a few drinks.

Nobody has reviewed Raymonds Restaurant yet, Be the first.