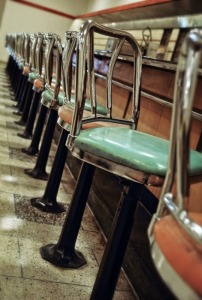 The International Civil Rights Center & Museum —a historic landmark, exhibiting and collecting institution, and educational service organization—promotes an understanding of the struggles for equality, justice, and freedom in the United States and across the world. The Museum, located in the former F.W. Woolworth building, was the site of the 1960 lunch counter sit-in protest against racially segregated eating accommodations. The 1960 Greensboro sit-ins reignited the civil rights movement in opposition to “Jim Crow” restrictions.

Since its opening on February 1, 2010, the International Civil Rights Center & Museum has garnered a stellar reputation for its educational guided tours of the historic landmark (see reviews on tripadvisor.) and connecting the African American fight for justice in the United States the same struggles to escape oppression in other communities around the world.

“The International Civil Right Center and Museum is an important stop for the participants of the International
Visitors Leadership Program of the U. S. Department of State. Rising Leaders from other countries are often sent
to Greensboro just to learn about our civil rights history, and there is no better teacher than the ICRCM. The leaders
find the museum informative and moving.“

One set of stories we convey in our 16-gallery interactive exhibition, The Battlegrounds, is the role that members of the community played in bringing about social change. Citizens, both black and white, believed in the righteousness of their struggle. They wanted an America to be a land of opportunity for everyone without restrictions based on race.

The rehabilitated F. W. Woolworth's building, funded by proceeds from the tax credits and other public and private contributions, is listed on the National Register of Historic Buildings. It is also a part of the United States Civil Rights Trail, a consortium of 15 locations being nominated for listing as a UNESCO World Heritage Site. Unique among the other 15 sites on the official United States Civil Rights Trail, the ICRCM was founded as a center for international reach, understanding that the Sit-In Movement has powerful lessons to teach about the transformative and strategic impact of non-violent protest against established injustice and conventional practices of invidious discrimination that infringe civil and human rights.

The Civil Rights Museum is both a First and 14th Amendment institution. Our 14th Amendment thematics of equality and full citizenship are easily recognized. But as a non-governmental expressive institution, the Museum also has a First Amendment constitutional right to direct and control its public messages. In that regard we are not different from a newspaper. Or a church, which should would not be expected to make its pulpit available to someone advocating against religious belief.

We invite you to come and go on a life-changing journey with us, you will be glad that you did.

Nobody has reviewed International Civil Rights Center & Museum yet, Be the first.