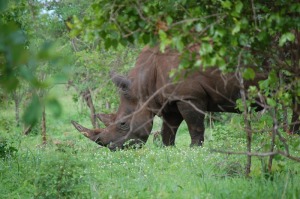 Welcome to Savannah Southern Safaris, your ultimate walking safaris partner! If you believe the best and most natural way to enjoy any place is engaging in natural pursuits, then you qualify to be one of our nature walk partners, because we are all about nature.
Nature here manifests itself in the bush’s endless landscapes, the mighty flow of the Zambesi river which attracts on its banks hippos, elephants and water-birds, and the majestic Victoria Falls, Musi-O-Tunya, the Smoke that Thunders.
But nature is also revealed in the industriousness of rural villages and the extreme kindness of their people, the colours and the smells of local markets, the creativity and the skills of artists and artisans, enjoy dance and local cousine. If your interest lies in discovering the priceless beauty that surrounds us, then we would like to share with you some precious moments in some areas of Zambia which are very special to us.
Savannah Southern Safaris offers you a wide selection of nature walk experiences, ranging from walking safari, birding and exclusive rhino walks. We also make it possible for you to experience the daily life of villages and markets and to visit historical places in and around Livingstone by helping you come into contact with the real life of Africa.
Today's typical African safari as enjoyed from the back of a game viewing vehicle is an unforgettable VISUAL experience not to be missed. Safari vehicles can cover vast distances in response to game sightings and, as most wild animals are accustomed to the sight of vehicles, they can be approached closely, which gives excellent opportunities for wildlife photography.
Actually strolling through the savannah is an experience that puts the walker in direct contact with colours, smells and noises, with no barrier filtering or modifying one’s perceptions: in this way you can actually feel nature. .
Walking through the bush you can for example appreciate the scent of wild sage, which has a slightly lemony smell, you can hear the flapping of an ibis’ wings when he flies off a few metres away, you can nose around weavers’ nests which are organised like blocks of flats, or witness the tireless, colossal work of termites. Walkers are guided to uncover the mysteries of this kingdom: from the footprints of the buffalos and those of the giraffes, to the funnel-shaped web at the bottom of which the spider patiently awaits its prey…… For a brief moment you will be able to be part of this world and to share its events, both tiny and big.
Walking safaris through the Musi-o-Tunya national park and surrounding areas are suitable for active and adventurous participants. They offer a rare and intimate opportunity to explore and learn about the African bush, its game and birdlife. Our experienced and knowledgeable local guides will show you some of our animals which include giraffes, zebras, wildebeest , warthogs, primates, antelopes, elephants to mention but a few, as well as the bush’s fantastic flora: teaks, mahoganies and the mopane and marula trees which for elephants are a real delicacy. During our mid-walk breaks near the mighty Kasamba Bezi, popularly known as Zambezi River, we’ll have the chance to observe close up the lazy hippos and the ibis perched on the trees along the river banks.
Our tours usually start at 6:30 in the morning and they last a minimum of 3hrs.
Depending on the season, noon walks are also possible, from 14:30 to 17:30.
Musi-O-Tunya Park prides itself of at least 450 or more bird species, most of which are resident. Migrating birds set in around November/December while some waders may come in as early as August. These Palaearctic migrants leave in March and April towards the destinations in the northern hemisphere where they spend the winter. Most birds can however be seen all year round.
Savannah Southern Safaris will provide birders exclusive tours in the park and the surrounding areas where some special birds like the mostly solitary Miombo Pied Barbet (Tricholaema frontata) the Taita Falcon (Falco fasciinucha), which is almost extinct, and the elusive African Finfoot (Podica senegalensis) can be seen.
But even if these birds may be difficult to spot, you will undoubtedly have the privilege to see the Red-billed Hornbill (Tockus erythrorhynchus) which thanks to his red bill is difficult to miss, and the African Sacred Ibis (Threskiornis aethiopicus), which was venerated by Ancient Egyptians as a symbol of the god Thoth. You will also be able to admire the amazing work done by the weaver birds (Ploceidae), that build apartment-house nests.
A little out of town, one may also spot Africa’s most localised parrots “The black- cheeked love birds” (Agapornis nigrigenis).
Birding tours start as early as 6 hrs in the morning because “It’s the earliest bird that catches the worm!” and they last between 3 and 4 hrs.
Afternoon trips are also possible.
For the more adventurous birders we 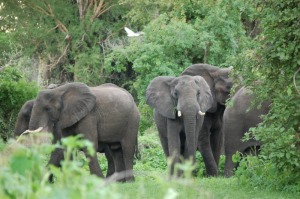 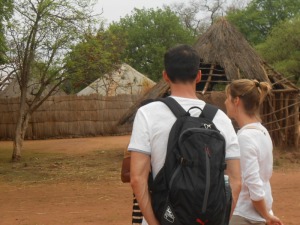 Get introduced to local building technics and secrets of local culture 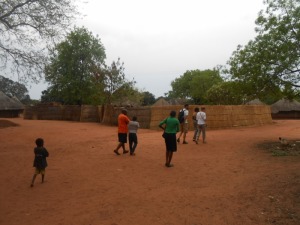 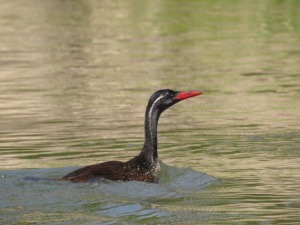 African Finfood, try to spot it on our birding tours 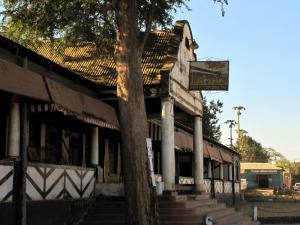 Architecture from the first years of town settlement 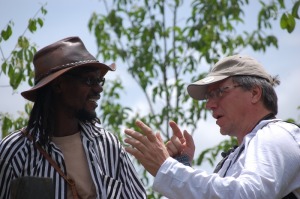 Discussions and interactions are always welcome! 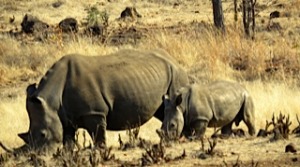 the last years we had several young rhinos in the park 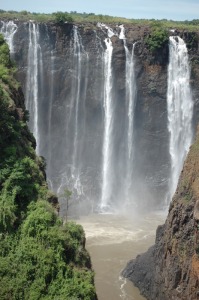 View from the Zambia-Zimbabwe Bridge

Nobody has reviewed Savannah Southern Safaris yet, Be the first.