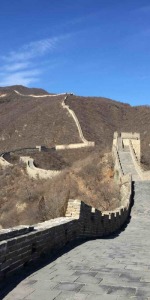 This tour combines two important must-sees in the city as well as a visit to the famous Great Wall of China. The Tian'anmen Square and Forbidden City are at the center of Beijing. Being the largest city-center square in the world, the Tian'anmen Square mainly consists of two parts: the Tian'anmen Gate and the Square itself which includes some iconic buildings on and around it. The Forbidden City was the place where the 14 Ming Emperors and 10 Qing Emperors of China resided for almost 500 years. Having been off-limits to the commoners for centuries, it was officially opened to the public in 1925 as a public museum. This tour will also take you to the section of the Great Wall at Mutianyu, the most beautiful and less crowded section of the Great Wall in Beijing. It is located in Huairou District, about 52 miles northeast from downtown Beijing.

Tiananmen Square
Pick up at 8 am to start from Tian'anmen Square, the biggest city-center square in the world. We will see some of the iconic buildings in Beijing, like the Front Gate, Chairman Mao's Mausoleum, Monument to the People's heroes, Great Hall of the People, Tian'anmen Gate and National Museum of China.

Forbidden City
Continue to see the Forbidden City, the place where the Ming and Qing Emperors resided for more than 500 years. It is the largest and best-preserved Imperial Palace in the world. Lunch will be served in a local non-tourist Chinese restaurant.

Great Wall at Mutianyu
Drive 1.5 hours to the Great Wall. Then start the 1.5-3 hours hiking on Mutianyu, the most beautiful section of the Great Wall and less touristy. The Great Wall at Mutianyu was built and restored in the early Ming Dynasty (1368-1644), on the remnants of a Wall originally built in the Northern Qi Dynasty (550-577). Cars have to stop at the foot of the mountain and visitors need to take the shuttle bus both ways to and from the parking lot. From the parking lot, it takes about 10 minutes to reach the cable car station and another 5 minutes to get on the actual Wall.

Note
• This tour is N/A on Mondays except during Summer Holiday (July 1st - August 31st).
• A valid passport is required to get into the Forbidden City. We need each traveler's name and passport number to book tickets online in advance.
• Please email us the number of travelers, names of the tour and lead traveler, detailed name and address of hotel upon booking.
• This is a private day tour, no shopping stop is included.
• Your guide will hold a sign of Wikibeijing in the lobby, and please pay the tour fee to him directly at the end of the tour.

Nobody has reviewed to be revisied yet, Be the first.