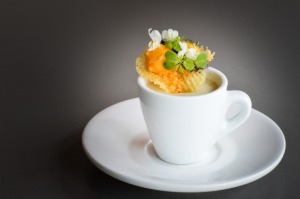 To much anticipation by Philip Johnson’s strong local following, ecco bistro opened its doors in 1995, starting what has turned out to be a Brisbane landmark restaurant. Located in an historic building on the fringe of Brisbane’s central business district, the century old former tea warehouse oozes with character an ambiance. Almost twenty years on, ecco underwent a total refurbishment in October of 2014, giving it a contemporary look, yet preserving the inviting, warm bistro feel that has stood the test of time.

As Philip says “We do as little as possible with the best ingredients available.”

“It was in France that I fully appreciated the unique pleasure of a traditional bistro. I travelled to Languedoc to discover Beziers, a picturesque French town on the Orb Rivers. I wandered into my first true bistro and was instantly smitten. It was just as I had imagined – located in the town square and a hive of activity, bustling with communal and smaller tables and unforgettable with the noise of people enjoying the food while talking business, sport and politics. I was so captivated by the environment that I didn’t want to leave. It was at that moment that I knew what direction my restaurant would take.”

In Philip’s view, the essence of a bistro is simplistic, no-nonsense, almost austere environment – no tablecloths, relaxed yet efficient service by staff who dress down rather than up and food that is honest, wholesome and full of flavour. They succeed in all these areas. Nobody has reviewed e'cco Bistro yet, Be the first.