From $125 NZD
Double Room Per Night

We Have 3 Queens
6 Twins
2 Singles All Rooms Have Tea/coffee Making Facilities With Bottled Water And Biscuits. Every Room Has A Radio
Flat Screen Tvs
Free Wifi In Everyroom
Bar An Restaurant
Tab An Gaming Room
Live Entertainment Friday's And Saturdays Night Till Midnight.

The Kentish Hotel is a Historic Hotel built in 1851, by Mr Edward Constable from Maidstone Kent. He applied for a special publican,s license for the sale of liquor on the 10th January 1853 and was granted license number 47, this license still applies today, making us the longest continuous licensed hotel in NZ.
We have a pub with over 450 historic photos of the surrounding area.
Throughout its long history The Kentish Hotel has been the heart of Waiuku life since it was built. It occupies a central location in Waiuku across the rd from the popular Tamakae Reserve which serves as a base for the Waiuku Museum and many other attractions including Manaukau Heads/light house, black sandy beaches and a very nice local winery.
The Constables establised the hotel as an icon in early Auckland by advertising on the front page of the New Zealander, the most popular paper of the period. Travelers began recommending the establishment and it grew to be immensely popular, even hosting such dignitaries as the Maori King, Te Whero, Sir George Grey, Richard Seddon.
With its position along a major trading route between the fledging colonial Auckland & the rich, fertile lands of the Waikato, the Kentish thrived. (Through the times during the land wars of the Waikato begining in 1862-1863, the Kentish was an important staging piont)
In 1926, the Kentish nearly burnt down when a fire destroyed a block of wooden buildings opposite. As the wind fanned the flames a host of volunteers poured water and hung wet sheets over the facade.
We have 11 rooms, 4 Queens, 5 Twins and 2 singles. Each room has their own hand basin, tea/coffee making facilities and flat screen freeview TV, we offer free parking and free fibre optic wifi
All toliets and showers are shared facilities.
We also have a Restaurant that is open for lunch and dinner, offering great value meals of the highest standards. The bar offers local beers and we have live entertaiment Fridays and Saturdays, we close at midnight.

Dusk at The Kentish Hotel 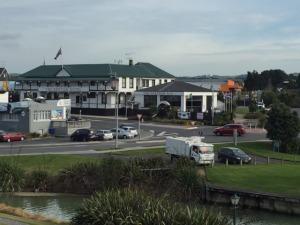 Kentish Hotel from the estuary 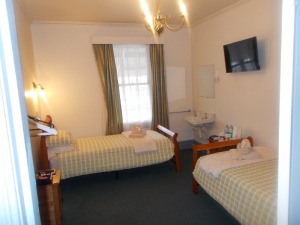 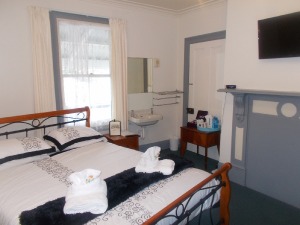 Nobody has reviewed The Kentish Hotel yet, Be the first.