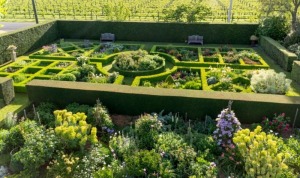 Nestled in grape country, hidden behind high hedges, lies the private but nationally acclaimed garden of Upton Oaks. Surrounding the 1911 Victorian homestead are gardens that have been recognised as a 'Garden of National Significance' as awarded by the NZ Gardens Trust.

The vision was to create a romantic garden that would compliment the Villa, and today comprises of a number of garden rooms, all contained within a formal framework of hedges and brick walls.

The house, enclosed by trim lawns and borders of shrubs including roses and perennials, is separated from the large 17th century style knot garden, by sharply trimmed hedges. Here the geometrical box hedged beds are filled with flowers, each with a different colour theme, reds, yellows, whites and blues.

Twin herbaceous borders lie beyond the Lonicera nitida hedge which backs the knot garden. A pair of standard pittosporums give strength to the carefully planted borders and the very old walnut tree is central to the design of this garden.

A winding path from the borders, leads through the Olive Grove which is left purposely natural as a contrast, to the productive garden where large raised vegetable beds and espaliered fruit trees on brick walls feature.

From here the long vista to the French styled iron gazebo draws you to the rear gardens, containing blue and white garden beds and to the relocated and restored 1850’s guest cottage, fitly named Laurella Cottage, after Dave and Sue’s daughters, Laura and Ella. To the west of the cottage is a simple, small knot garden and to the east clever use of old bricks, lawn and gravel make an intimate courtyard within the hornbeam hedges.

This is a garden which offers a potpourri for the senses and garden rooms to explore. Upton Oaks Garden has graced the pages of numerous magazines plus television screens and is visited by many national and international groups each year. 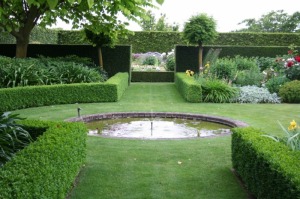 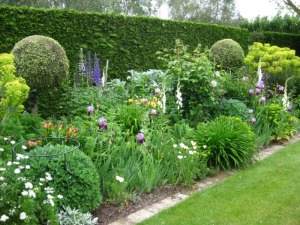 Nobody has reviewed Upton Oaks Garden yet, Be the first.