From €18 EUR
Per Adult - Concessions Available 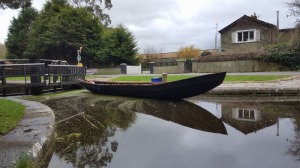 Boyne Boats provides guided paddling tours of the Boyne River and Boyne canal navigation (Battle of the Boyne) using hand crafted traditional Kerry Naomhog currachs that have starred in the hit TV show – Game of Thrones. There is no other way to experience the atmosphere the Boyne Valley generates than to get on the water itself. Boyne Boats guide you through 5,000 years of Ireland’s Ancient East. Young and old can paddle together and feel what it was like to travel on the sacred Boyne all those years ago. Hear about the battles that shaped Ireland and the magic that spawned legends. Connect with others on nature’s epic highway and then top it all off with some stories from the set of the biggest TV show in the world!
The stats:
Ireland's oldest canal - 269 years
Ireland's largest battle - 60,000+
Europe's largest collection of Neolithic art - Bru na Boinne
The world's only Game of Thrones experience using actual boats from the TV show

Option 1:
PADDLE LIKE AN IRON ISLANDER from 14 euros
Perfect for families with small kids. Learn to paddle like an Iron Islander and travel upstream towards the Battle of the Boyne.
Enter the overgrown 'jungle' area and hear the sounds of the jungle.
Keep an eye out for the fairies and their door to another world.
Hear about the magical stories and legends of the Boyne valley such as the Salmon of Knowledge.
Watch out for trolls as we travel under the fairy bridge!
All our tours can be tailored to a group if required

THE KING'S TOUR from 18 euros
Nothing but the best for our King's Tour
We'll take you on a trip back in time for a tour lasting 1.5 hours. Paddle the full length of the canal and back. 3.2km
A guided tour of the Battle of the Boyne paddling a traditional Irish currach under the guidance of our skipper
Capture the history of the Battle of the Boyne and Ireland's Ancient East, the heritage of the currach and the fantasy link to the Game of Thrones TV show
Under the guidance of your skipper you and up to 8 crew members propel yourself through history!
Ireland's Ancient East meets Westeros

THE BATTLE OF THE BOYNE BOAT ADVENTURE
Our purpose built boat takes you on a journey of fact and fantasy. Learn about the history of the Battle of the Boyne as we bisect the battle site. Hear what it was like to be on the battlefield as it happened.

Setting off from the sealock at the Lock keeper’s house, we travel upstream and around Oldbridge house – The Battle of the Boyne visitor centre. The canal measures 1.6km long and 10m wide at its widest point and is safe for beginners and families young and old.

As a crew of up to eight, you will receive some simple paddling and safety instruction and off you go under the steerage of an experienced helm/guide. Paddle together as a team to build up momentum and really highlight what you and your currach are capable of.

Along the way, you will hear of the main protagonists during the Battle of the Boyne – King James II to the South and King William III to the North. The canal now bisects what would have been the main fording point for the battle as it was the shallowest area of the river for King William’s forces to cross. Travelling along the canal gives the visitor the unique perspective to imagine the battle and with our audio enhanced experience, you will feel like you are right in the middle of the action!

The paddling techniques you will learn are the very same used to train the Iron Islanders in Game of Thrones, so you can imagine yourself heading off to Pike on a raid with Yara and Theon Greyjoy.

This is very much a ‘dry’ water activity and no wetsuit is required to participate. However, as it is still a boat on the water we always expect the unexpected.

We comply with the Dept. of Marine Code of Practice for the safe operation of recreational craft. Life jackets are provided for all participants: Solid foam for younger paddlers and automatically inflated life jackets for those a little older in the flesh if not in the mind!

As this is Ireland, we strongly recommend you consult the weather forecast for the day you have booked your boat adventure. Otherwise, it is best to dress warm and comfortable for a little exercise and bring rain gear just in case. Comfortable walking shoes or boots are smiled upon; high heels are not friends of skin boats and frowned upon!

Boyne Boats at the Sealock 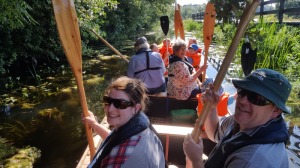 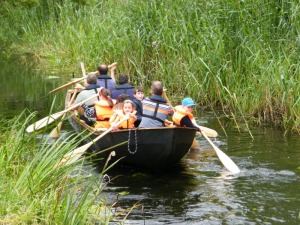 Heading upstream on the Boyne canal 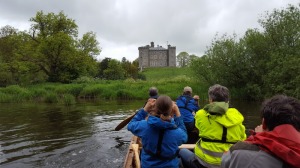 Nobody has reviewed Boyne Boats yet, Be the first.