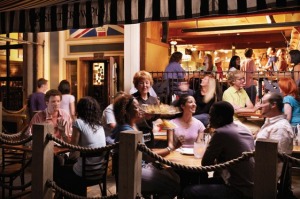 On July 17th, 1749, Governor Cornwallis granted a license to sell beer and liquor to a Mr. John Shippey. This was the first liquor license to be issued in New Scotland (now Nova Scotia).

John Shippey named his tavern ‘The Spread Eagle’, as its sign was taken from the German coat of arms – The Double Eagle. Shortly after opening, the tavern became affectionately known as ‘The Split Crow’.

John Shippey’s ‘Split Crow’, located at the southwest corner of Salter and Water Street, quickly became a second home for sailors, mariners and travelers. It was there that they could expect comfortable lodgings, hearty platters of food and generous mugs of grog. In the tradition of the day, music was played, ladies entertained, politics were discussed and, inevitably, fights broke out. One of these fights resulted in the first ever murder charge in Nova Scotia.

More than 250 years later, although in a different location, the Halifax-based Split Crow is expanding. Now with locations across Nova Scotia, the Split Crow continues to proudly serve mariners and travelers from around the world and nearby. A welcoming smile, great food, generous mugs of grog and, of course, great music . . . the tradition continues.

Nobody has reviewed Split Crow Pub yet, Be the first.