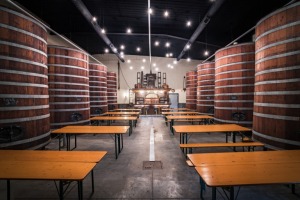 Starkeller is the latest venture for August Schell Brewing Co. Brewmaster, Jace Marti. As a 6th generation family member, Jace has provided much direction into this sour-only brewing facility. It is currently the only sour-only taproom in the entire Midwest and the Berliner-Weisse style beers are brewed within the same walls.

From the outside, it appears to be a tin shop, but once you walk in the door, everything changes. The walls leading to the taproom are filled with old artifacts from the brewery. Once you enter the taproom, every piece in there has a story. The taproom is lined with ten Cypress barrels from 1936 that were reconditioned for the purpose of aging the sours. When you drink a beer in this facility, you will be sipping it right along side of the next batches for release. Some of the sours in our Noble Star Collection are in these tanks for up to two years!

You just have to see it for yourself! Starkeller is open every weekend, Fridays 4-8pm, Saturdays 12-8pm, and Sundays 12-4pm. 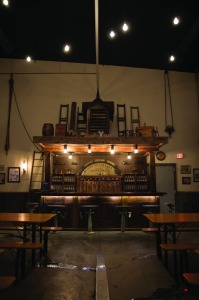 Nobody has reviewed Starkeller yet, Be the first.