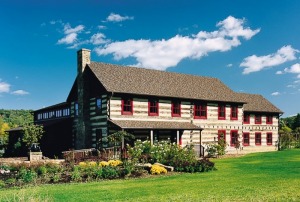 Founded in 1997, the Southern Alleghenies Museum of Art at Ligonier Valley is one of four regional art museums encompassing the Southern Alleghenies Museum of Art. SAMA boasts the nation's longest-running satellite museum system and welcomes more than 60,000 visitors annually to its four locations in Altoona, Johnstown, Ligonier and Loretto. The Museum is accredited by the American Association of Museums and has been a partner of the Pennsylvania Council on the Arts since 1998. SAMA offers an ambitious slate of in-school education programs, as well as the Museum/Healthcare Partnership Program, which has provided relief for thousands of area citizens dealing with physical pain and discomfort.

Unique to SAMA-Ligonier Valley is the impressive Walter Carlyle Shaw Collection of paperweights, which is on permanent display. The collection numbers nearly 200 paperweights spanning 150 years. The Museum also offers five beautiful flower gardens on the museum grounds, which serve as the setting for the annual Garden Party fundraiser, typically held in late May or early June. The Museum also offers the annual plein air painting event, Paint Out, summer art camps for children, lunch and lecture programs, and a Holiday Home Tour.

In 2017, the Museum is celebrating its 20th anniversary by offering several exciting programs. UFO researcher Stan Gordon will present on March 15, the annual dinner-and-awards event Night of Distinction is scheduled for late April, and the Garden Party on June 3 will offer an exclusive exhibition of vintage automobiles of the 1920s and '30s. The celebration culminates in September with a family day open house, cook-out and art auction.

Each of SAMA's museums is open to the public free of charge. SAMA-Ligonier Valley is open 10 a.m. to 5 p.m. Tuesday through Friday and 1 to 5 p.m. weekends.

Nobody has reviewed Southern Alleghenies Museum of Art at Ligonier Valley yet, Be the first.