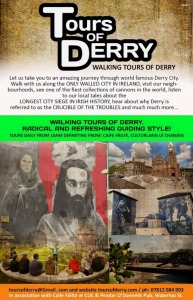 Experience Derry through the eyes of a local private tour guide.

Tours of Derry is operated by local man Ruairi O hEara who is one of the longest established and experienced tour guides in his beloved city of Derry, which is fast becoming one of the most popular destinations in Ireland for all age groups.
Tours of Derry offers a range of tours of the city of Derry, including specialized tours of the Bogside area. This area has been directly involved in many of the key events of the ‘Troubles’, including Bloody Sunday, the Battle of the Bogside and the Hunger strikes. It has now been transformed into a modern, vibrant estate and the famous political murals of the ‘Bogside Artists’, which chronicle the history of the conflict, have made the area the most popular visitor attraction in the city.
At Tours of Derry our expert guides can explain the history of the area in detail and can offer a unique insight into the ongoing peace process by providing the opportunity for groups to engage with leading political figures who are directly involved in the process.
We also offer tours of Derry’s famous 17th century walls, which are the only intact set of ramparts left in Britain and Ireland. Other tours on offer include the story of emigration from Derry’s port, which should be especially interesting to US, Australian, Canadian and British visitors of Irish extract. We can also offer tours of the city by coach and our guides would be delighted to accompany your groups on our ever-popular tours of the Giant’s Causeway, Inishowen peninsula, Donegal highlands and south Donegal.

Our packages can also incorporate reduced admission to a range of attractions including the Museum of Free Derry, a fabulous new museum that offers a visual history of the early Troubles period in Derry. Our extensive contacts with accommodation providers and activity specialists allow us to offer tailored packages for groups who would like to base themselves in the city for overnight stays or on a longer basis. We also have extensive contacts with tourism and cultural bodies across Ireland, which means we can assist you in organizing your overall itinerary while visiting our country
On this tour you will learn about the foundation of Doire (Derry) dating back to the time of columcille in 546AD,) Derry played a significant role throughout the years of mass Immigration from Ireland Particularly during the Famine (An Gorta Mór), Derry’s walls date back to 1618, while walking on these walls you will learn of the Siege of Derry (1688-1689) and also you will be able to view the beautiful St columbs Cathedral. As you walk into the Bogside which is one of the most affected areas in the North of Ireland with over thirty years of troubles, the place which saw the birth of the civil rights movement, Battle of the Bogside, Bloody Sunday, and an Area that showed much resistance towards the security forces and the British Army who regularly invaded the area.


Here you will be told about how the civil rights movement began and further events which happened following that, for example The Battle of the Bogside, Bloody Sunday, Interment, The Hunger Strikes and much more. At the end of the tour you will be given the opportunity to visit the museum of Free Derry


Having years of experience in guiding tourists through the beautiful parts of Ireland in our coaches. Every tour is led by a fully qualified and passionate guide, who will ensure that you are enriched and engaged by your visit.

Travel with us to what is commonly called “the eighth wonder of the world” in one of our award winning coaches along the Causeway Coastal Route – voted one of world’s 5 most spectacular drives!

Enjoy the first stop of the day at the world famous Bushmills Distillery. Here you can also browse in the extensive gift shop, or make a visit to the bar to have a swift taste or two of the famous tipple!

We then re-board our coach, and make our way along the coast, for a short stop at the ancient ruins of Dunluce Castle.

From there we move on to the highlight of the tour – Giant’s Causeway, Irelands only World Heritage Site. Spend some time climbing over the ancient stones, snapping photos, and enjoying the myths and legends that surround this world famous attraction.

Then onward to the world famous Carrick-a-rede Ropebridge. The brave among us can make the terrifying trip across the bridge (weather permitting)* that was originally erected by salmon fishermen. Those who prefer to keep their feet firmly on land can take one of the exhilarating walks and enjoy the stunning views.

Nobody has reviewed TOURS OF DERRY yet, Be the first.