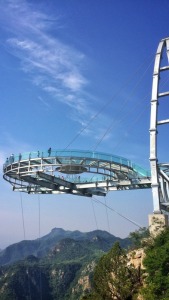 This private Beijing tour will take you to the newly opened Shilinxia Viewing Platform, which is about 768 meters above sea level. It is the largest sightseeing platform in the world which covers an area of 425 square meters. The platform is located on the peak of Longwangding, the highest point of the Jingdong Stone Forest Gorge. It is also known as Shilinxia in Chinese, a scenic area about 70 kilometers to the northeast of Beijing. After lunch, you will be transferred back to the city to see the Ming City Wall Ruin Park. You will see the only 1.5 kilometers long city wall of the Ming Dynasty, as well as the largest archery tower in China. The total length of the wall used to be 24 kilometers long which was built in 1419. In 1960s, it was demolished to make room for new roads and the subway.

Nobody has reviewed Private Day Tour: Shilinxia Viewing Platform and Ming City Wall Ruin Park yet, Be the first.