The Bank Bar and Restaurant 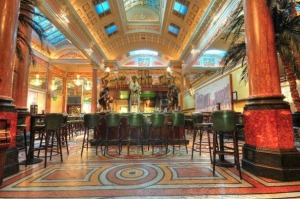 OUR GOAL IS TO SERVE A SEASONALLY CHANGING, FARM-TO-TABLE MENU WHILE PROVIDING GENUINE, CONSISTENT AND EXCEPTIONAL SERVICE IN AN UP-SCALE YET RELAXED ATMOSPHERE. WE STRIVE TO SOURCE LOCAL PRODUCE.

The Bank Bar and Restaurant opened in May 2003 and is located on College Green in the heart of Dublin.

This site has been occupied since Viking times, as we are located in the oldest region of the city in close proximity to the viking Parliament or Thingmount. In the 17th and 18th centuries the area grew to even greater importance following the construction of Trinity College and later the Irish House of Parliament (Grattan’s Parliament) across the way on College Green.

In July 2nd of 1892 the Belfast Bank acquired this property from the British Mutual. The construction project that followed – a symbol of grandiose Victorian splendour – took two years to complete, costing in excess of £8,000.

The exterior is Franco-Scottish in inspiration and is unique in that it is one of Dublin’s rare examples of Scottish sandstone. The interior, which was once the main banking hall, is a stunning example of merchant power and patronage displaying an extraordinary ornate setting, stained glass ceiling, mosaic tiled floors and spectacular hand carved plasterwork and cornicing.

If you ramble downstairs to the nether regions you will find the vaults. Look at our Chatwood safes, now retained as a museum-type feature. 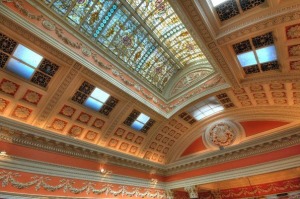 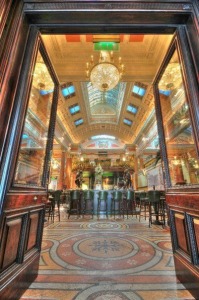 Nobody has reviewed The Bank Bar and Restaurant yet, Be the first.