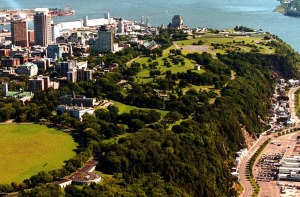 The site of many clashes for supremacy between the French and British Empires, the park is the scene of the 1759 Conquest, which changed the fate of North America. Apart from its historical past, the park is to Québec what Central Park and Hyde Park are to New York and London: a city park of outstanding value, the lungs of the city. One hundred and three hectares of meadow and grassy knolls, decked with flowers or covered with snow, are there for residents and visitors to enjoy.

On March 17, 1908, the law creating the National Battlefields Commission (NBC) was sanctioned to highlight and preserve this site, unique in the world by its sheer size, its geographic location, its historical role and its beauty. The Battlefields Park, which groups together the Plains of Abraham and the Des Braves Park, was developed to honour the memory of both French and British combatants.

The Act creating the National Battlefields Commission (NBC) was passed on March 17, 1908. Since that time, the Commission's mandate has been:
•to acquire and conserve the great historical battlefields in Quebec City;
•to turn them into a national park;
•to preserve this historic Canadian legacy for future generations;
•to develop it so that the public fully benefits from these riches.

The National Battlefields Commission is a federal government agency under the portfolio of the Minister of Canadian Heritage. The Commission is administered by a nine-member board of directors. Its enabling legislation authorizes the appointment of representatives to the board by the Provinces of Quebec and Ontario in addition to the seven whom are appointed by the Privy Council. These provinces contributed at least $100,000 to creation of the Commission. In 1908, an international fundraising effort raised over $500,000 toward acquisition of the land.

Nobody has reviewed Plains of Abraham Museum yet, Be the first.