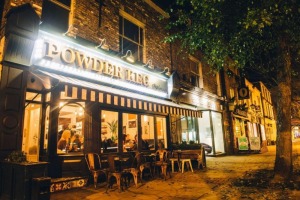 A combination of colonial Britain, Victoriana and hints of the industrial set the tone for Powder Keg Diplomacy.
A picturesque, bright conservatory area boasts Victorian finishing’s and floating gramophones which
have been reclaimed and repurposed into light fittings.

The central bar is drenched in deep blues. Raw brickwork surrounds a working fireplace framed in sofas and
chairs perfect for lounging, cocktail in hand. Look upwards to see a giant map of the world stretching across
the ceiling and a 3D Antelope sculpture coming to life from within an oil painting which crowns the wall.

Join us for a drink at The Rifle Bar or dinner in The Observatory Dining Room.

We serve seasonal cuisine and source only fresh ingredients therefore our menu changes regularly, sometimes daily. For this reason our online menu may not be our most up to date but will definitely provide an idea of the type of food we serve.

A drinks menu including punches and cocktails promises concoctions influenced by Victorian imagination, ingenuity and innovation.

A Wine list representing the old, the new and the unusual of what the wine world has to offer has been based around Britain and the colonies. Powder Keg Diplomacy’s cellar also incorporates a Friend’s & Foe’s section for the old world wine lovers out there including cases from
France, Italy, Germany and Spain.

The beer list is built around great traditional British brewing, whilst doffing its cap to the new breed of micro-brewed ales from around the British Isles. Micro and cutting edge breweries are at the forefront of the fight to offer quality brews in the pubs and bars of the UK, therefore Powder Keg Diplomacy are dedicated to working with them. With over 40 microbreweries in London, we have decided to focus our beer
menu on what our neighbours have to offer.

With an awakening in enthusiasm for craft beers and ales, Lost Brewing will collaborate with producers to recreate lost and forgotten ales,
lagers and ciders.

Nobody has reviewed Powder Keg Diplomacy yet, Be the first.