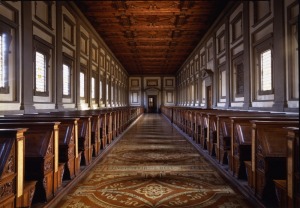 The Biblioteca Medicea Laurenziana represents one of the highest examples of Michelangelo’s skill as such an architect. Access to the Library is through the staircase, designed by Michelangelo and built by Bartolommeo Ammannati. The Reading Room hosts two series of wooden benches, the so-called plutei, which functioned as lecterns as well as book-shelves. The stained-glass windows were realised by a Flemish workshop in keeping with Giorgio Vasari's drawings.
During the first decades of the 1800s, a rich collection of incunabula and original print editions was donated to the Laurentian Library by the Florentine aristocrat Angelo Maria D’Elci (1754-1824). The donation led to the construction of a Tribune designed by the architect Pasquale Poccianti. In order to accommodate this new circular structure on the right side of the Library, it was necessary to demolish part of the room’s walls , thus compromising the order of window.
During the mid-1700’s and the end of the 1800’s the Library acquired a series of important collections, including the autograph manuscripts of Vittorio Alfieri and the manuscripts of Lord Ashburham. During the first decades of the 1900’s acquired 2.500 Greco-Egyptian papyri: these collection is one of the most important in the world. 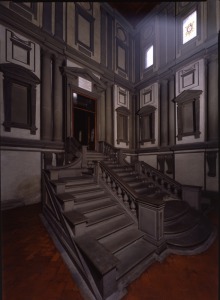 Nobody has reviewed Biblioteca Medicea Laurenziana yet, Be the first.