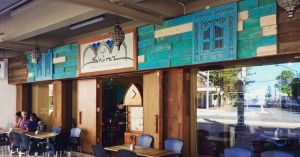 Iran is a country with a diverse geography and ethnic population. It sits at the centre of the former Kingdom of Persia, one of the world’s oldest continuous major civilisations. Iran forms a bridge between the Middle East and the Far East in the centre of the ancient Silk Road, a major trading route which goes back tens of thousands of years.

Persian cuisine has influenced many world cuisines, and has absorbed elements from other cuisines as well. It's no surprise that Persian ingredients such as saffron, pomegranate and spinach have made their way into other cuisines! As ancient traders took their wares to the corners of the world, they traded goods, bringing back the eating habits and ingredients from Greece, Rome, Turkey, Russia and India. Today's Persian cuisine traces its roots to ancient Persian ingredients and recipes, and is enriched by the great tastes imported from the rest of the world!

Shiraz carries a great selection of vegetarian items on our menu and we’re a certified Halal establishment.

Shiraz Authentic Persian Restaurant is perfect for couples, families & larger group bookings, with easy access to Parking, central location and prompt friendly service.
Please note we are not Licensed and no BYO.

Nobody has reviewed Shiraz Authentic Persian Restaurant yet, Be the first.