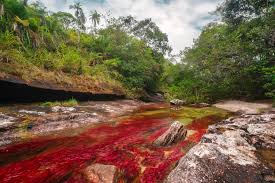 This river in Columbia puts on a brilliant, almost impossible to believe, rainbow color display each year during the end of September into the beginning of November.  Opened back up in 2009 after being closed due to guerrilla activity in the area, Caño Cristales can be reached by horseback or guided tour. Visitors are not allowed to cook or stay the night. Conditions must be just right for the Macarenia clavigera plant to grow on the black rocks of the river.  With the right combination of low water levels, and the perfect amount of sunlight this unique species of plant becomes a brilliant red. The Caño Cristales has the perfect combination of green algae, yellow sand, black rocks and red Macarenia clavigera to put on this beautiful display of nature’s beauty. Jacob’s Well is a perennial karstic spring in the Texas Hill Country flowing from the bed of Cypress Creek, located northwest of Wimberley, Texas.  It is one of the longest, and MOST dangerous underwater cave systems in Texas.  Although many people have taken the “plunge” at least 9 people have died jumping into the well over the years and 8 scuba divers have lost their lives attempting to navigate the depths. From the opening in the creek bed, the cave descends vertically for about ten meters, then continues downward at an angle through a series of silted chambers separated by narrow restrictions, finally reaching a depth of forty meters.  At some locations the passageways become so narrow that divers need to remove their tanks temporarily in order to squeeze through.

The first chamber is a straight drop to about 30 feet; then it angles down to 55 feet. Nourished by the rays of sunlight that penetrate the crystal water, this cavern area is bright and is home to algae and wildlife. The third chamber is a small room with a floor of unstable gravel. Divers must inflate water wings to navigate this chamber successfully, trying not to stir up silt or dislodge the gravel.

The passage into the fourth chamber is very tight. The few who have seen the fourth chamber say it is “virgin cave” with fantastic limestone formations and no gravel. Covering the bottom is fine silt that can totally obscure vision when kicked up by one misstep. The Belize Blue hole is know to be one of the most stunning areas located in the Lighthouse Reef and is also considered a diving paradise. It’s not only the most unique dive area in the world, but is also the only blue hole that may be seen from space. This incredible blue hole is almost a perfect circle and is over 1,000 feet or 305 meters wide and 480 feet or 146 meters deep.  The Belize Blue Hole is in a cave that was formed above sea level,. This may be proved by the fact that Stalagmites and Stalactites are unable to form underwater, and are only able to be formed due to constant dripping that is seen on stalagmites in many cave systems above ground. What makes the Belize Blue Hole so interesting, is the fact that over 500 rare plants and animals that are located only in this area. Giant stone jars of unknown ancient origin are scattered over hundreds of square kilometers around Phonsavan, giving the area the misleading name of Plain of Jars.  It’s a curious name, as most of the jar sites are located on hillsides. These giant jars are fashioned from solid stone and archaeologists estimate they date from the Southeast Asian Iron Age, between 500 BC and 200AD.  Although scientists and archaeologists still dispute the actual use of the jars, it is hypothesized that they were used as funerary urns.  There are also many local legends surrounding the jars.  One such legend claims that they were made to brew vast quantities of rice wine to celebrate the local people’s 6th-century liberation from cruel overlords by the Tai-Lao hero Khun Jeuam. It is said that on upon a time, the jars were made by a race of giants to keep his rice wine after the great military victory. Another local tales telling these enormous jars were used to collect the rainwater in the monsoon season.  Smaller jars have long since been carted off by collectors but around 2500 larger jars, jar fragments and ‘lids’ remain. As the region was carpet-bombed throughout the Indochina wars, it’s miraculous that so many jars survived. Located on the border of Brazil, Venezuela and Guyana, Mt Roraima is part of the Pacaraima chain of flat-topped mountains, known locally as tepui. The word means “house of the gods” in the native tongue of the Pemon, the indigenous people who inhabit the Gran Sabana.  The mountain was considered taboo for many centuries.  Locals feared it for many reasons…reports of bizarre creatures living the mountain top, legends of a vicious race of apemen called “Dis-Dis” and even myths of flying pterodactyls! Approximately 35 % of the species on Mt Roraima are endemic, such as the Roraima bush toad and 70% of those found on South America’s tepuis exist only on these plateaus. Other species are like living fossils, almost identical to plants and animals that are now extinct in the rest of the world. For millions of years, life has been existing completely independently on these mist-shrouded mountaintops, away from the prying eyes of civilisation. While the nearby Andes formed relatively recently — around 25 million years ago — this chain of flat-topped mountains is far older. More than two billion years ago, sand settled on the ocean floor. Gradually this sandstone uplifted, eventually becoming dry land. Over time, some of the sandstone eroded away, leaving the tepuis towering over the surrounding lowlands around 70 million years ago.  Fun fact, tt rains almost every day on the plateau of Mt Roraima, creating the gushing waterfalls!