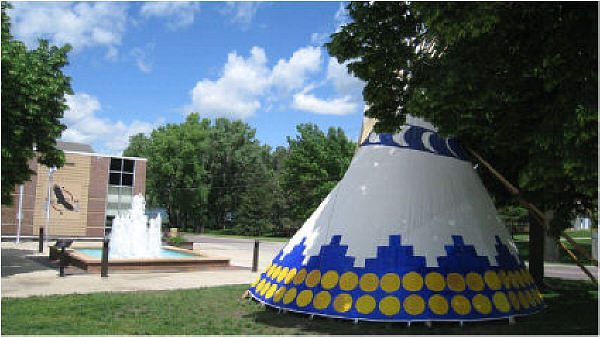 The Akta Lakota Museum & Cultural Center opened in 1991 on the campus of St. Joseph’s Indian School.

The words “Akta Lakota,” meaning “to honor the people,” were chosen because the museum is truly intended to honor and preserve the rich culture of the Lakota people, the students at St. Joseph’s Indian School and for thousands who visit the museum each year.

The Akta Lakota Museum & Cultural Center is housed in the former school building; an octagon shaped building with 14,000 square feet of display space. The museum’s collection features art, artifacts and educational displays that depict the proud heritage of the Lakota people.

Much of the museum’s original collection came from gifts given to St. Joseph’s by alumni and friends since the school opened in 1927. Since the museum opened, it has acquired many new pieces and continually strives to add relevant pieces to the collection. The museum also houses a Collector’s Gallery, which gives local artists a place to display and sell their work.

The facility is more than a traditional museum; it is an experience that provides visitors with a living lesson on the Native American way of life, both past and present.

The museum tour reflects the four cardinal colors and directions: East — Camp Circle depicts life on the plains prior to the Euro-American contact; exhibits explain historical relationships of tribes and bands, featuring items of traditional cultural.

South — Two Worlds Meet details on the arrival of Euro-American explorers, missionaries, traders and settlers in the early 1800s.

West — Broken Promises outlines the US government’s involvement with the Sioux, the loss of traditional lands and treaties, and maps out current reservation lands.

North — Continuity and Change illustrates how Native Americans adapted to their new way of life and successfully preserved their traditions and heritage.

Our museum is a tribute to the Sioux nation and offers visitors a rare and fascinating glimpse into the Lakota culture.

Since the museum's opening in 1991, thousands of people worldwide have been captivated by the unparalleled style, scale and richness of the facility and its displays of Lakota life — both past and present.

Visitors are taken on a visual journey through the proud heritage of the Sioux and into the excitement of contemporary Sioux art.

The Akta Lakota Museum is the only Native American cultural center of its kind. The facility is more than a traditional museum; it is an experience that provides visitors with a living lesson on the Native American way of life.